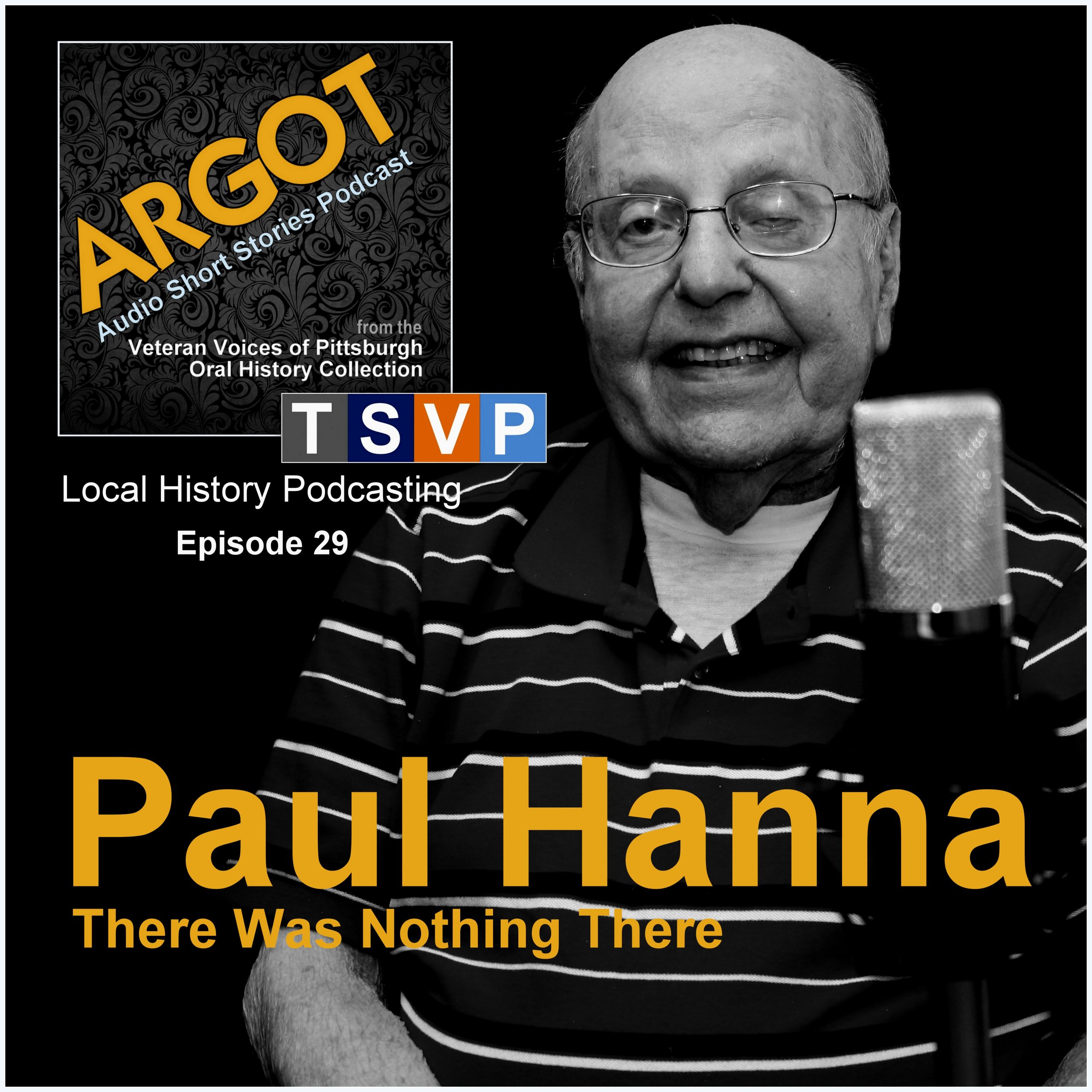 There Was Nothing There

In this episode of the podcast, WWII Army veteran Paul Hanna of Pittsburgh, Pennsylvania talks about visiting Hiroshima shortly after the atomic bomb destroyed the city in 1945. Paul Hanna is among the very few Americans to have personally witnessed the atomic aftermath at both Hiroshima and Nagasaki, Japan.  Like many WW II veterans, Paul has little doubt that the bombing was justified.  For him, it was necessary . . . or else.  Had the invasion of Japan proceeded as planned, it is estimated that hundreds of thousands of people on both sides would have died.  In the late fall of 1945, Corporal Hanna was in the breach of this impending attack on Japan, prepared to follow orders.

Paul Hanna grew up in West Newton, a small town fed by the Youghiogheny River some twenty-five miles southeast of Pittsburgh.

The Hanna family was large and close.  Patriotic.  The Hanna’s contribution to the war effort was unselfish; four sons served simultaneously.  Moe the oldest flew with the Army Air Corps as a navigator in North Africa; he eventually fulfilled his mission quota and returned home early in the war.  Pete became a career naval officer, getting his start as a cadet at Carnegie Tech.  Paul was drafted into the Army, as was younger brother David who saw extensive combat in both Germany and France.  The youngest brother Donald would serve in the Army during the Korean War.  In answer to their parents’ prayers, all of the Hanna brothers returned home to West Newton—one by one and unharmed.

Paul speaks matter-of-factly about of his military service, as do a surprising number of WW II veterans.  He calls himself one of the “unattached and unassigned” members of the Army.  It was as if the Army needed him (he was drafted in 1943), but then couldn’t decide how.  After induction he was sent to a half dozen different training bases to learn how to do a half dozen different jobs.  As much a lowly corporal as anyone, he was even briefly put in charge of more seasoned, senior, but segregated “colored” troops during one of his stays in the Deep South.  Back then, rank and race had its privileges.

Eventually the Army found a useful assignment for Paul and it shipped him across the Pacific to be part of a diversionary force that would attack Japan’s backside.  He was to land on the main island and fight long and hard enough until US forces could make their main assault.

Like many GIs hurriedly sent to the Pacific in preparation for the invasion, Paul witnessed one of the largest military assemblages of manpower and machines the world has ever seen.  At the island of Ulithi, he says, “There were so many ships you couldn’t count them.  Thousands of them.”

After the atomic bombs were dropped and Japan surrendered, Paul finally made a landing onto Japanese soil in October 1945.  He went ashore at Kure, about twenty miles from Hiroshima.  There was nothing there.  The city was just like you see it in pictures he says.  The Army also told him that it was safe, as long as he didn’t stay too long in the city or pick up anything as a souvenir.  Paul wasn’t about to.  Not there or in Nagasaki, which he also visited.

After only a few months in Japan, Paul was sent home.  Without much fanfare, he was quietly discharged in February 1946.  After arriving by train at Pennsylvania Station, Paul promptly got into his father’s waiting car and that was it.  The war was over.  Going to war was a necessary thing to do, but after it ended it was time to get on with their lives, Paul contends in that same matter-of-fact tone.

Like many of his fellow veterans, Paul used the GI Bill after the war.  He obtained a college degree in 1949 from Carnegie Tech—known today as Carnegie Mellon University—and went on to have a very successful thirty-three year career as an engineer.

Paul Hanna died in November 2011, five months after this interview with The Social Voice Project.