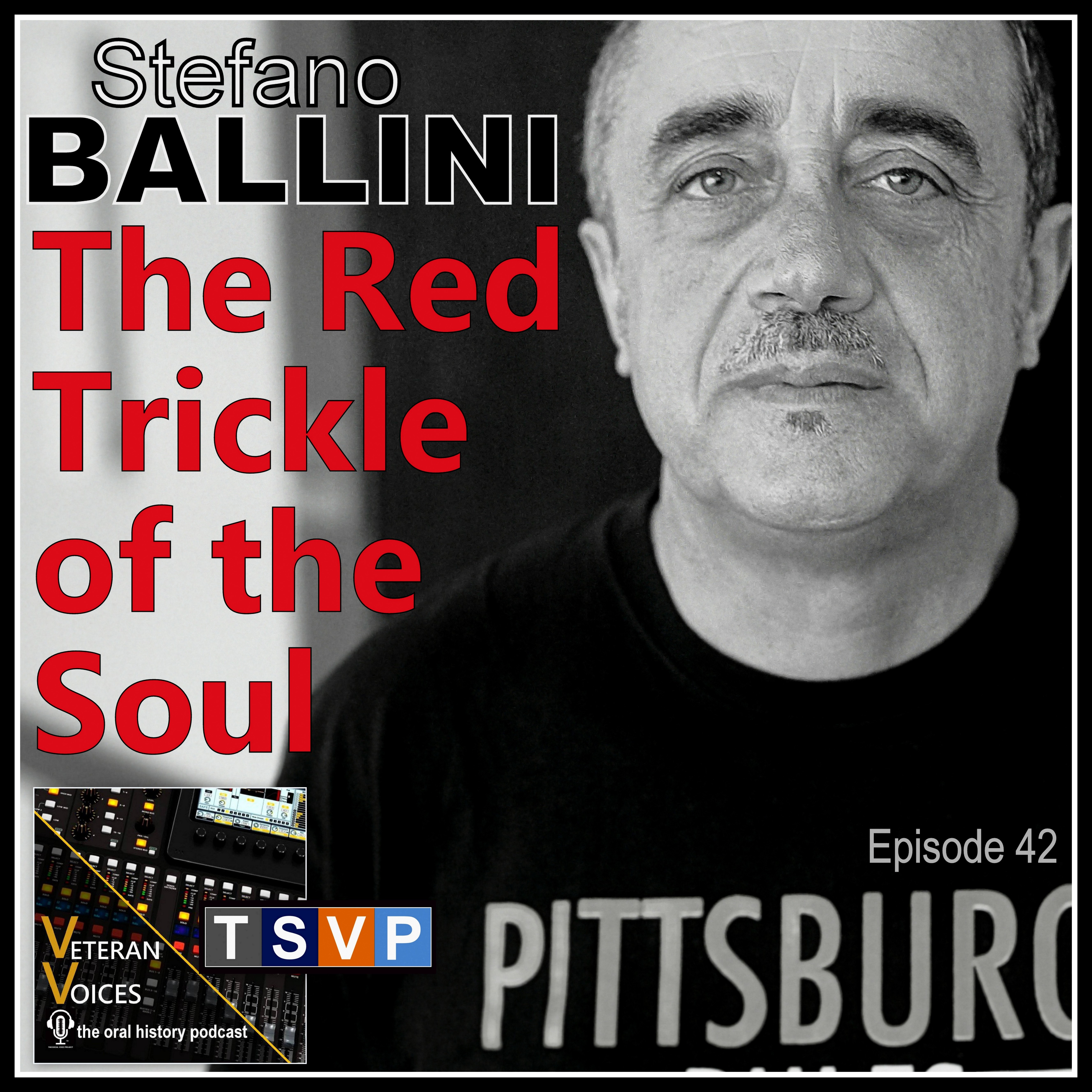 The Red Trickle of the Soul

READ THE TRANSCRIPTION BELOW On episode 42 of Veteran Voices: The Oral History Podcast, we talk with Italian filmmaker Stefano Ballini about preserving veterans stories, the moral injury of war, and his most recent documentary, The Red Trickle of the Soul–featuring Pittsburgh area veterans of WWII, Cold War, and Vietnam War.

Stefano Ballini – The Red Trickle of the Soul

ED BLANK: Was, and am, extremely proud of my military service.

GEORGE HAUGHT: Within the first twelve hours I saw more death and destruction than most people would in a lifetime.

AL DEFAZIO: I come from a little town called, Altavilla Irpina, in the province of Avellino.

STEFANO BALLINI: This is Stefano Ballini and are you are listening to the Veteran Voices History Podcast.

CAROLE ZIPPY BRENNAN: When my dad and I were alone, he told different stories.  He told about the only regret he ever had—the regret of the boy who died in his arms.  Both of them just kids, nineteen years old. And when my dad told me that story about not being able to get the address and the names of that young man, he said to me, “I just wanted them to know that their son died in the arms of a fellow soldier.  He didn’t die out on the battle field.  He didn’t die in a muddy trench.”  And my dad, at ninety-one, started to cry.  He remembered all of those stories.  And we have to remember the stories of all the men who fought.  Stefano, there are not enough words to say thank you for keeping the memory of Frank [Gervasi], and Michael [Vernillo], and my dad [Vittorio Zippi], and my uncle [Lou], and countless others—you’re keeping them alive.  You are a witness.  Thank you, Stefano. You are a witness.

ANNOUNCER: You are listening to a production of The Social Voice Podcast Network.

KEVIN FARKAS (PODCAST HOST): We have a very special guest today from Italy. His name is Stefano Bellini. He’s a filmmaker and documentarian specializing in veterans’ stories.  And Stefano is here in the United States, he’s here in Pittsburgh, to show his English version of his latest film, The Red Trickle of the Soul. Welcome Stefano, to Pittsburgh.

STEFANO BALLINI: Thank you, thank you.

This is your second time here?

Yes, I love Pittsburgh.  I love it so much. [laughter]

Your film, The Red Trickle of the Soul, is your second documentary film.

Before we get into talking about your film, tell us a little bit about your background, what you do in Italy, and your interest in filmmaking.

Yes, I started about 8 years ago with the first film called, Il Treno che Bucò il Fronte. In English, The Train Through the Warfront. It is the story of my father who embarked in Anzio with the allies in 1944.  That is was the first film and it was very successful. The President of the Italian Republic, Giorgio Napolitano, invited me to Rome for the “Day of Remembrance.” After that people became interested in my work and what I did, so I also had to make other films. The last film, The Red Trickle of the Soul is the second film about veterans, not only of the WWII but also of the Vietnam War.

Your last film featured veterans from Pittsburgh: Frank Gervasi, Vittorio Zippy, Michael Vernillo. Pittsburgh area WWII veterans. This film, The Red Trickle of the Soul, has veterans from Vietnam, World War II, and the Cold War.  You have Ed Blank, Vietnam War.  Harry VanRiper, also Vietnam.  Al DeFazio who is a WWII veteran, who fought in Italy, crossed the Rapido River.  And you also have Ben Wright who was in Vietnam but also the Cold War as a pilot.  Why did you choose these veterans for your film?

This is a very different film from the others because Monte Sole Landing Memories was a story, a story of friendship, war and hope for the future, in which the knowledge of war brings a better future. This film is different because it looks inside people’s souls and not just at events.

At Carnegie Library in Pittsburgh you have your debut of your film. Are you excited about that?

What is the central meaning of your film?

For me it’s a test, a test because I want to talk about the WWII and the Vietnam War even if they are very different wars. I look within the soul of the those suffering most of all.

Have you shown your film to audiences and Italy?

What is their reaction?

The reactions are very different.

Very different because the message of the film is more difficult than usual.  Sometimes people do not understand because they think that I put the Second World War on the same level as the Vietnam War. I only look at the effects of war on each person.

Young people, do they understand?

This is your second film. How did you learn how to make film?

I learned that . . . war is the last of the possible solutions because it always affects every person, which is part of suffering or aggression. Every person in war is strongly affected negatively in the mind.

Did you teach yourself how to make film?

Because it doesn’t cost much, all my films are without profit, without Euros, without money!

. . . in the knowledge and the subject, and you want to share these stories, veteran stories, with the public.

All my films can be viewed online for free on the internet–YouTube and Vimeo.

So you put them free online so the whole world can watch.  Do you know how many people from different countries have watched your films?

Do you have another film that you want to make?

I do not know. I don’t know at the moment.

Films are a lot of work. A lot of effort, lots of time.

Not at the moment, but I like talking about stories and non-Italian people. The last two videos are with veterans, I like to talk about war from other points of view, not just in Italian.

Not only in Italian.

I like to bring to Italians stories from around the world.  This film is in two parts, the first speaks of the Second World War, the war suffering in the concentration camp of Auschwitz, of an Italian partisan together with the allies in Italy in ’44, war suffering by the survivors of the German massacres in Italy, and it also speaks of Albert DeFazio, sent to Italy near his family home, from where he had emigrated. The second part of the film is completely different. In this half of the film I say, now we talk about war differently! The Vietnam War begins and there is, in addition to the Pittsburgh veterans, an Oregon veteran of Italian descent who made a military career in the United States.  He was in Vietnam and other places. At the beginning of the film there is a criminologist specializing in assistance to the victims of war and anti-terrorism. At the beginning of the film she explains the effects of war on people’s minds.

Normandy is one of the most beautiful places I have ever seen, as the beach is beautiful, very symbolic, very beautiful and sad. When we arrived at the beach we were very silent. The cemeteries are very large. We visited two cemeteries, the one at Omaha Beach and the other in Brittany, where Michael Vernillo’s friend [his lieutenant] is buried. He is buried in Brittany because he died at the end of July 44, killed by a German sniper.

I remember Michael asked you, when you visit, to find his lieutenant.

For the Normandy landing, boys are very interested because they saw Spielberg’s film . . .

All those who have seen the film are interested in Vietnam. Many people are intrigued because the war on television and in the movies is very different from what I show.

Al DeFazio fought in Italy.  Salerno, Monte Cassino, Rapido River.  There are no films about that fight.  Why are there no films?

In Italy there are not many films that talk about war because the war has divided the population into two. Before the war there was a dictatorship, fascism.  After the war everyone was no longer fascist, but antifascist.  Many people changed from one day to another, but in reality they are the same.  So the political thought of people is divided and it is not easy to make a [war] film. There are not many war films made by Italians.

Yes … it takes a lot of money for movies but no finance in Italy.

No one has money.

You are from Florence?

And you are a winemaker? Vino.

No, I went to school for wine production, but I do not make it.

You don’t make it.

When I come to visit you, you’re going to show me bene vino, good vino?

Who does not make war does not understand it; only those who make war understand.  There is a lady from Bologna who once said, “Se ogni persona al mondo vivesse 5 minuti di guerra, al mondo non ci sarebbero più guerre!”

Five minutes. The message is this, ok, in English: if every person in the world lived just five minutes of war, then there would be no more wars.

[Closing: Peter Yarrow at “The Vietnam War Summit: One, Two, Three: What Are We Fighting For?”] The Veteran Voices: The Oral History Podcast features conversations with those who tell veterans’ stories in creative and interesting ways, such as oral historians, authors, poets, playwrights, and photographers. This podcast is a production of The Social Voice Project, Inc., dedicated to understanding the voices and stories of our lives through the first-hand, authentic accounts of lived experiences we call oral histories. The podcast was formerly produced by the Veteran Voices of Pittsburgh Oral History Initiative, a veteran-run, award-winning 501(c)(3) nonprofit educational organization based in Pittsburgh, Pennsylvania.