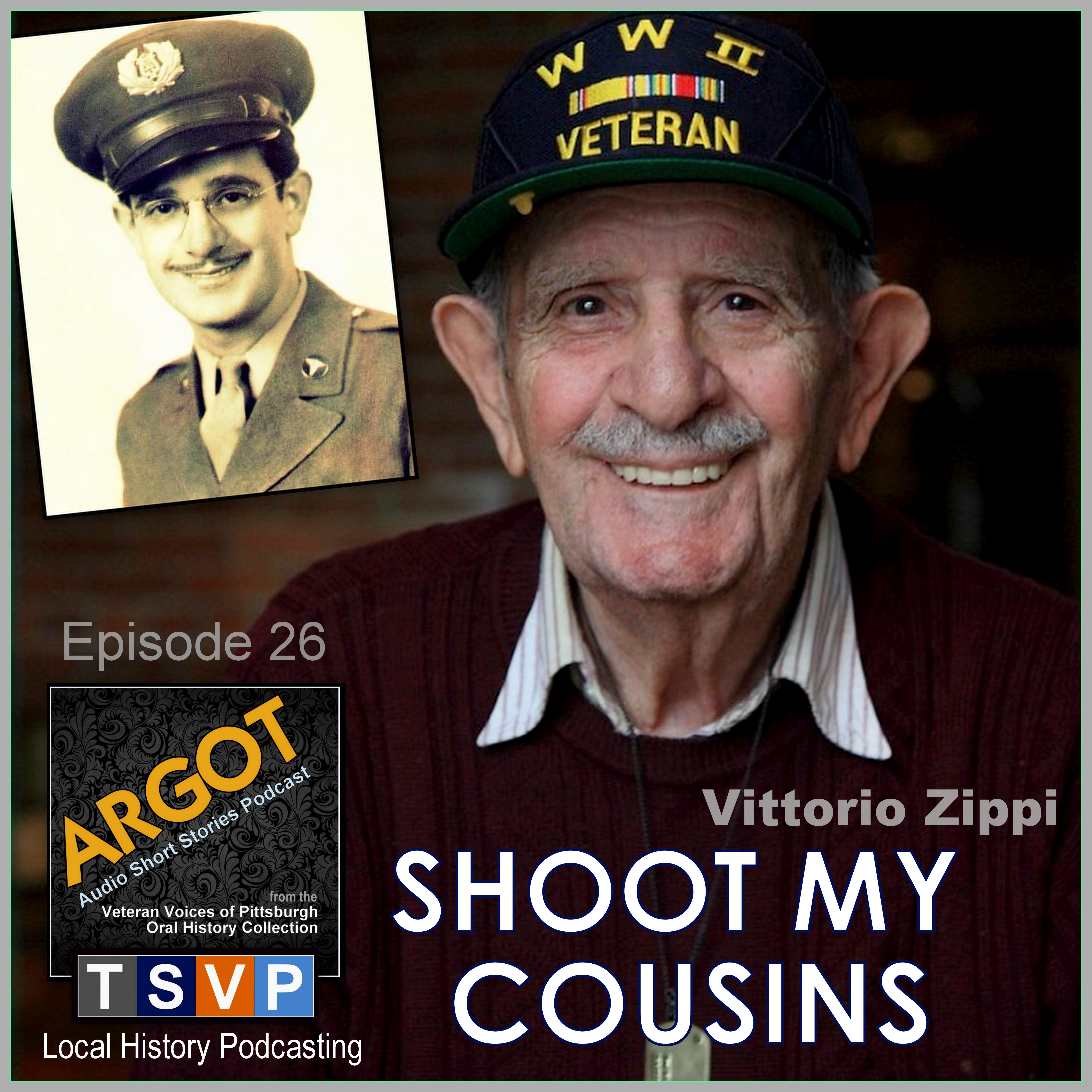 On this episode of Argot: Audio Short Stories from the Veteran Voices of Pittsburgh Oral History Collection, WWII veteran Vittorio Zippi of Jeannette, Pennsylvania grew up in the mostly Italian community of Crabtree and was among the first to be drafted into the army during WWII.  “Would you shoot the Italians?” asked his officers.  “Hell yes if they were shooting at me,” Vittorio replied.  “But they’re my cousins, you know,” he added, proudly recognizing his ancestry.  The army was suspicious and questioned his American loyalty; that hurtful mistrust stayed with Vittorio for the rest of his life. Vittorio Zippi grew up the son of Italian immigrants in Crabtree, Pennsylvania, learning to speak English in first grade.  Six months after the attack on Pearl Harbor, he was drafted into the Army—serving as a cook, musician, medic, and barber.

“Would you shoot the Italians?” asked the Army.  “Hell yes if they were shooting at me,” was his reply.  “But they’re my cousins, you know,” he added, proudly recognizing his ancestry.  The Army was suspicious.  They questioned his American loyalty.  It was a mistrust that still deeply disturbs him.

After spending twenty-seven months overseas during WWII–taking care of horrific D-Day casualties and dodging deadly V2 bombing raids in England–Vittorio was asked to re-register for the draft in preparation for the Korean War.  Married with two kids, he felt the full weight of another war experience bearing down on him.  “How lucky can I get the second time?” he wondered.

Time moves in one direction,” writes William Gibson, “memory in another.” And so, on the darkest edge of their twilight years, many WWII veterans want to reach into the past and share memories they once quietly put away after the war–the untold stories, still morally painful after all these years.

After sitting down with the Veteran Voices of Pittsburgh Oral History Initiative, Vittorio began to talk more openly to his family about his WWII experiences.  His daughter Carole Zippi-Brennan writes, “My dad said one of his biggest regrets was that he never got the name and address of a 19 year old soldier who died in his arms. He said he wanted to write to his parents and let them know that their son died in the arms of a fellow soldier and not out in the field someplace. He cried when he told me that story.”