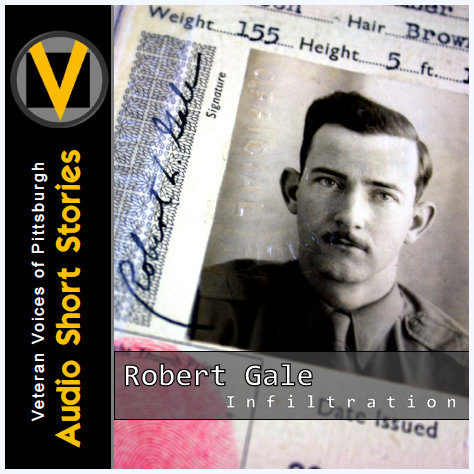 On this episode of Argot: Audio Short Stories from the Veteran Voices of Pittsburgh Oral History Collection, WWII veteran Bob Gale of Pittsburgh, Pennsylvania shares a story about a dangerous and unnerving counter-intelligence mission testing flight-line security on an Allied airbase in England. After graduating from Dartmouth College in May 1942, Bob Gale applied to become a Navy cryptographer. He failed the physical because of his glasses and a shoulder injury. He volunteered for the Army Air Corps and eventually was assigned to the Counter Intelligence Corps (CIC). He served as an agent in civilian clothes in the US, and then in 1943 he shipped to England where he roomed in a boarding house owned by a disagreeable woman who often protested that Bob should be off fighting the war, like the other boys.

The landlady did not know that Bob’s job was to look for instances of spying, sabotage, and disloyalty among Allied forces and to investigate all prospective marriages between GIs and British women. He also interviewed wounded soldiers returned from the Normandy invasion. After serving in southern France, he married Maureen Dowd, a British citizen, and returned to the US after the German surrender.

The original interview was recorded October 20, 2012 by The Veteran Voices of Pittsburgh Oral History Initiative. This audio short was engineered and produced by Kevin Farkas.