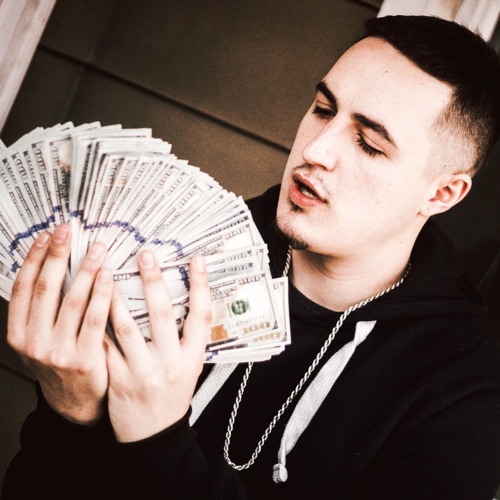 Artist’s bio (as found on Soundcloud): “23 year old Evan Stewart better known as Young Ev is an up and coming rapper from Ambridge, PA about 16 miles North from the city of Pittsburgh. Early on in his life he loved Hip Hop. Growing up in a family of 6 (Mother- Carol Stewart, Father- Cristopher Stewart, Sister- Tyler Stewart, Brothers- Ian and Max Stewart)he grew up with a loving family but, his childhood was sometimes very disfunctional. Seeing bad influences left and right made it difficult for Evan to avoid trouble. “Stress started hittin me at like age 13.” he says. “My mother was my best friend and was also one of the kindest souls on this planet, but she was a horrible alcoholic and also an addict.” This often made things very difficult at home for the whole family. At the same time this is going on a family member in his family exposed Evan to selling drugs which comes with violence as well. This obviously leads to more trouble and stress to not just Ev, but to his family as well. His mother committed suicide on Oct. 18th, 2017. Having his heart broken in many ways leads him to start doing drugs and stop caring about life. “There would be times where I stayed up for 3-4 nights in a row strung out on multiple drugs” he says. “I was so depressed I would finally go to sleep and pray I wouldn’t wake up”. He then realizes his mistakes and goes to rehab on May 8th, 2018 at Gateway Rehabilitation in Aliquippa, Pa. After getting clean, things start to get better for him as he gets most of his normal life back and finds faith as well. “While I started to get a little better my brother, Ian, was still doing the same old shit. That man was another one of my closest friends I’ll ever have.” Ian recently overdosed from heroin on March 18th 2019. Ev claims this feeling is “worse than any physical pain I’ve ever felt”. Evan is still doing very well now and says that after having some experience on how to react to certain situations he realizes life goes on and nothing can hold you back from how much effort you want to give. His music is on all plat forms and recently dropped his first Album “No Slack” and he is best known for his songs “Do it” and his Young Ev freestyles. His NEWEST PROJECT is starting to give him a buzz and is labeled “Prophet” featuring 7 songs all produced by his friend, DMO. (1. Proud of me 2. The Bag 3. Racks 3x 4. Beaver County Struggle pt2 5. Mood 6. All the Time 7. Pop)as life goes on, Evan strives to be as successful as some of the greatest influences he now has in his life. ( Christopher Stewart, Reed and Mandy Hankinson, Justin and Tyler Adams, Ashley Meyers, Simon and Natalee Arias Thomas and Jessica Vena and many more). Styles include singing, drill-rap, rap and hip hop. FOR BUSINESS- 2676668039 OR stewartevan37@gmail.com”