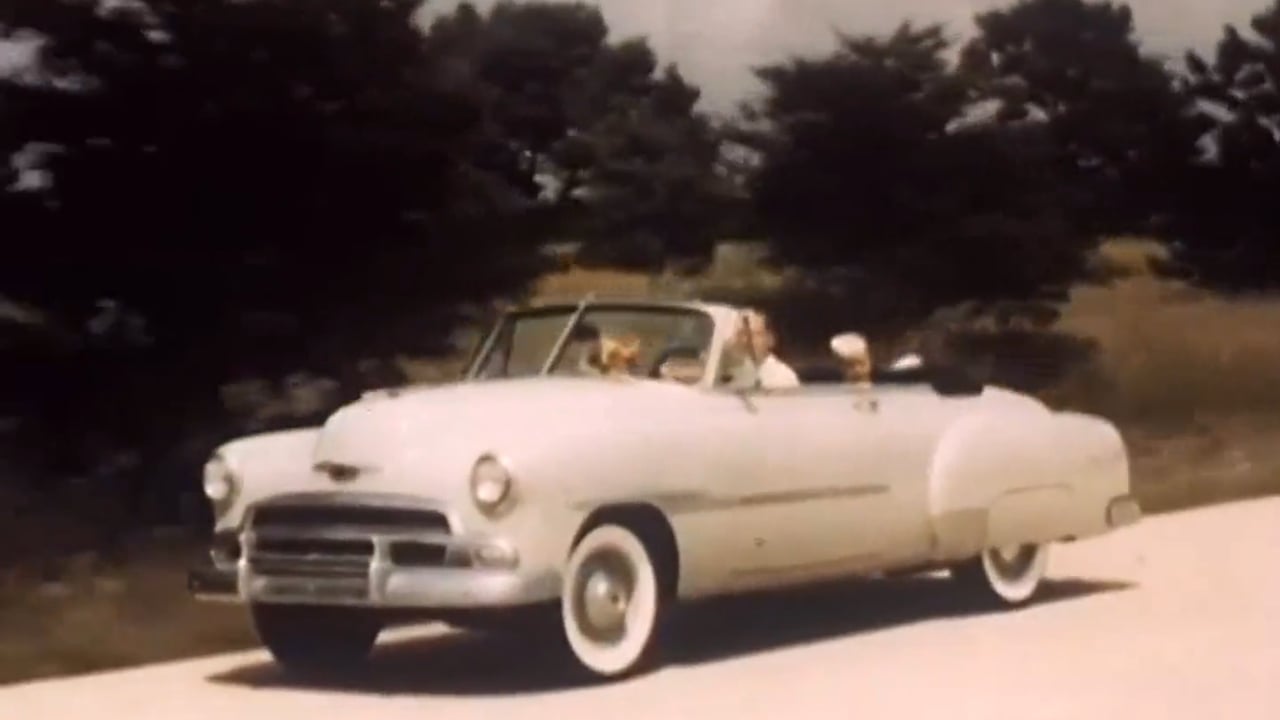 ‘Travelogue, made for theatrical showing and commissioned by Cheverolet, promoting tourism by car…’

Originally a public domain film from the Library of Congress Prelinger Archives, slightly cropped to remove uneven edges, with the aspect ratio corrected, and one-pass brightness-contrast-color correction & mild video noise reduction applied.
The soundtrack was also processed with volume normalization, noise reduction, clipping reduction, and/or equalization (the resulting sound, though not perfect, is far less noisy than the original).

The Pennsylvania Turnpike is a toll highway operated by the Pennsylvania Turnpike Commission (PTC) in the U.S. state of Pennsylvania. A controlled-access highway, it runs for 360 miles (580 km) across the state. The turnpike begins at the Ohio state line in Lawrence County, where the road continues west into Ohio as the Ohio Turnpike. It ends at the New Jersey border at the Delaware River–Turnpike Toll Bridge over the Delaware River in Bucks County, where the road continues east as the Pearl Harbor Memorial Extension of the New Jersey Turnpike.

The highway runs east–west through the state, connecting the Pittsburgh, Harrisburg, and Philadelphia areas. It crosses the Appalachian Mountains in central Pennsylvania, passing through four tunnels. The turnpike is part of the Interstate Highway System; it is designated as part of Interstate 76 (I-76) between the Ohio border and Valley Forge, I-70 between New Stanton and Breezewood, I-276 between Valley Forge and Bristol Township, and I-95 from Bristol Township to the New Jersey border. The road uses a ticket system of tolling between the Warrendale and Neshaminy Falls toll plazas. An additional eastbound toll plaza is located at Gateway, near the Ohio border, while a cashless westbound toll gantry using toll-by-plate is located at the Delaware River Bridge. E-ZPass, a form of electronic toll collection, is accepted at all toll plazas.

During the 1930s the Pennsylvania Turnpike was designed to improve automobile transportation across the mountains of Pennsylvania, using seven tunnels built for the abandoned South Pennsylvania Railroad in the 1880s. The road opened on October 1, 1940, between Irwin and Carlisle. It was one of the earlier long-distance limited-access highways in the United States, and served as a precedent for additional limited-access toll roads and the Interstate Highway System.

Following World War II, the turnpike was extended east to Valley Forge in 1950 and west to the Ohio border in 1951. In 1954, the road was extended further east to the Delaware River. The mainline turnpike was finished in 1956 with the completion of the Delaware River Bridge. During the 1960s an additional tube was bored at four of the two-lane tunnels, while the other three tunnels were bypassed; these improvements made the entire length of the highway four lanes wide. Improvements continue to be made to the road: rebuilding the original section to modern standards, widening portions of the turnpike to six lanes, and adding interchanges. Most recently in 2018, an ongoing interchange project saw the redesignation of the easternmost three miles (4.8 km) of the road from I-276 to I-95. Though still considered part of the turnpike mainline, it is no longer signed with turnpike markers…