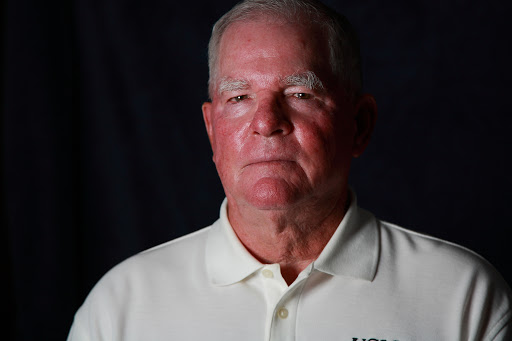 John Barber: In My Own Words

John Barber came home from Vietnam after two tours of intense jungle combat.  Sometimes during those search and destroy missions, most of the guys in his unit never made it back—at least in one piece.  Why he survived the odds is hard to understand, he ponders.  Maybe it was luck.  Maybe not.

POST SCRIPT: The Vietnam War was a long time ago. Memories sometimes disappear, fade, or blend together with others. Upon hearing his own story recorded for our project, John Barber remembered that it was his brother, not he, who carried that carefully worded “denunciation” letter. John carried a different kind of letter in his backpack that might have saved his life if he were captured by the enemy. It told of how he thought “the war was going nowhere” and he “disliked that so many Marines were getting killed”—all true sentiments, of course. Who could blame him? Many serving on the front lines seethe with disgust for war. They see a different kind of truth. “I threw my rifle down many times in the dirt demanding, When will it end?” John admits. “Then I’d realize, shit!, now I have to clean my rifle.”

This interview is a production of the Veteran Voices of Pittsburgh Oral History Initiative, in partnership with the Veterans Breakfast Club. It was recorded August 25, 2014 at VFW Post 128 in Rochester, Pennsylvania.  Interviewer and audio: Kevin Farkas.