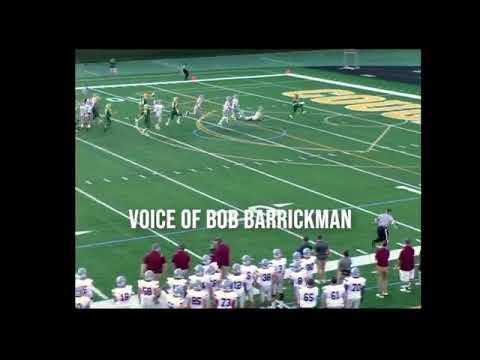 Here is the inaugural touchdown broadcast from an on site live stream video format created by Beaver County Radio.

Chippewa Township, PA)  72 years ago, WBVP started broadcasting local high school football and basketball games on the radio.  Over the years, there have been several changes, improvements and innovations to the traditional A.M. radio broadcasts, including utilizing cell phone technology instead of old copper phone lines to send a feed back to the studio, broadcasting the games on F.M., and distributing the programs via an online audio stream. Friday night, yet another milestone was achieved as the station created a live video feed from Blackhawk Stadium to cover the Cougars season opener against the visiting Beaver Bobcats.   Viewers to Friday night’s radio and video simulcast  of the Blackhawk vs. Beaver high school football game were treated to live video synced with the play by play of Beaver County Radio broadcasters, Bob Barrickman and Jason Colangelo.

The stations had been dabbling in video streaming parts of their programming off and on for about 2 years. Recently, with the announcement that high school football games in Pennsylvania would in fact be played, but with limited fan attendance allowed due to COVID 19 restrictions,  Program Director Frank Sparks convinced station ownership to invest in cameras and other equipment, and start video streaming high school football broadcasts.  Sparks added “It was a perfect opportunity to fill a void and serve area residents who would have wanted to watch the games in person, but could not under the circumstances.”  The new high tech audio and video simulcasts will also surely increase station usage and popularity throughout the fall on high school football game days, too. And so far, the gamble seems to be paying off.  Friday night’s video program post reached over 5,200 people so far, and it also had many viewers posting positive accolades on social media about the station’s efforts to make the game available in a video format.