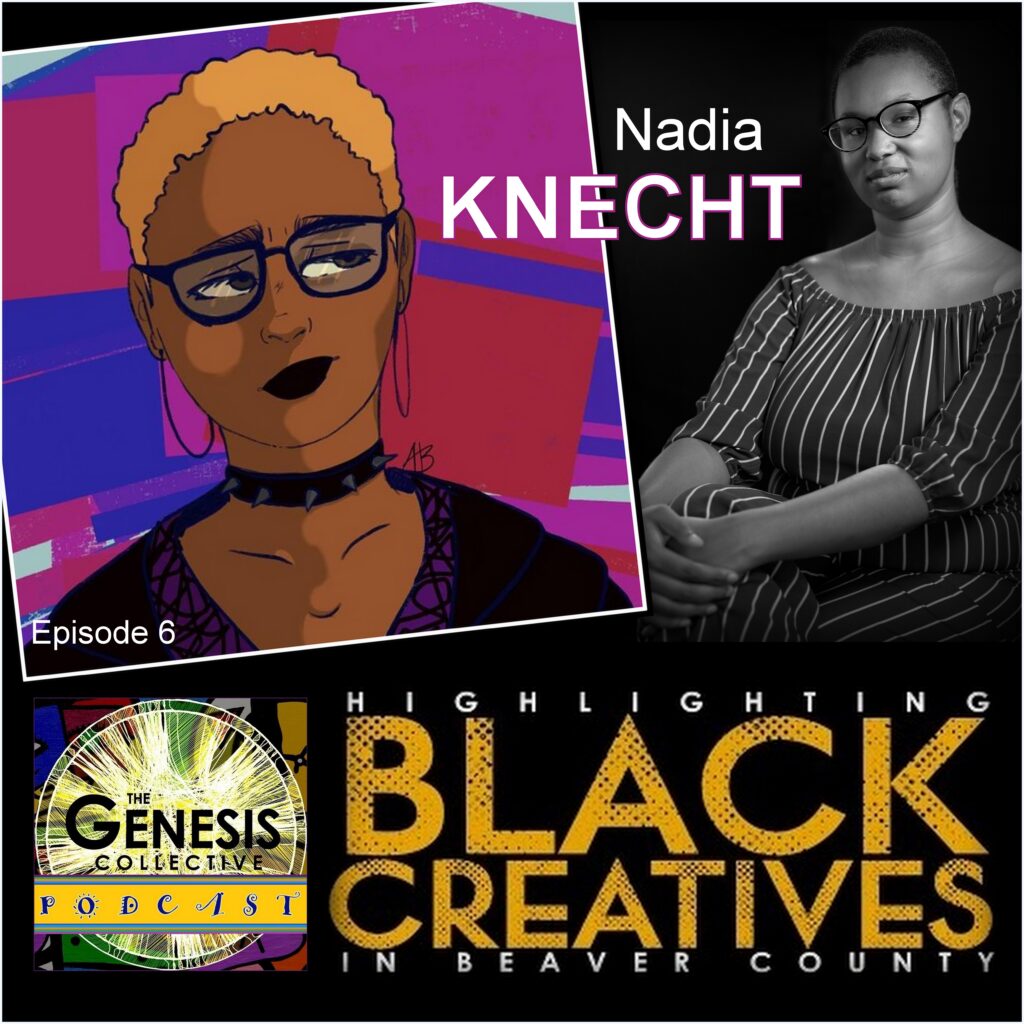 Nadia Knecht of Ambridge, Pennsylvania is our featured artist. Be sure to check out Nadia’s art on Instagram.  There you can see a wide range of Nadia’s cartooning talent.

That’s right, Nadia is a visual artist who specializes in character illustrations. It’s a serious art form—this cartooning–stretching as far back as the Middle Ages, where stylized drawings of characters were produced as patterns or models for artists making stained glass, frescos, or tapestries. Fun fact, Leonardo Di Vinci was a cartoonist.

It wasn’t until modern times and mass media (starting around the middle of the 19th century) that the stature of cartooning rose to the artistic level of political editorials, comic strips and books, and animated movies.

Today, with digital tools, cartooning is a sophisticated and elevated art form. In this episode, we’ll let Nadia explain why cartooning matters to her, both personally and professionally, as a black creative in Beaver County.

Come see the World Famous 20 foot Behemoth known as Zuverman!  He is rich in weightlifting history and has survived since the 1960’s.  Born on the beaches of Southern California he stood guard at one of the most fabled gyms in the world.  He now calls the Brickyard his home.  Zuverman is listed on The National Registry for Roadside Attractions. ~ Brickyard Gym

On each episode we feature a different piece of public art in Beaver County—from painting to sculpture, from grand to demure, from serious to silly. Public artworks are significant expressions about who we are and what we care about. They commemorate people, places, and events. They recognize history.

For this episode, say hello to Zuverman, billed as the world’s largest muscleman by Roadside America—a national publication and authority on more than 15,000 “odd and hilarious travel destinations” throughout North America.

Zuverman (aka “Big Z” by owner Rick Tsai) shares company with other nearby odd roadside attractions such as Randyland in Pittsburgh, all those slimey carp at the Pymatuning Reservoir spillway, the Trundall Manor House of Oddities in Swissville, as well as the world’s largest teapot in Chester, West Virginia.

We’ll let you discover Zuverman for yourself.  Roadside America says that a visit to Darlington, Pa to see him is “worth a detour” from whatever you’re doing to check out the impressive 20ft golden statue at the Brickyard Gym on Darlington Road.

You decide if the handcrafted plaster figure should be considered serious and worthwhile public art. Is this just a marketing gimmick? Does its commercial purpose detract from its representational and aesthetic qualities?

We have our opinions of course. We wouldn’t feature Zuverman in our public art highlight if we didn’t think the sculpture had artistic merit.

But we recommend that you go see it for yourself. Walk up to it and around it. It’s big, really big. Take a photo. Let us know what you think of “Big Z.”