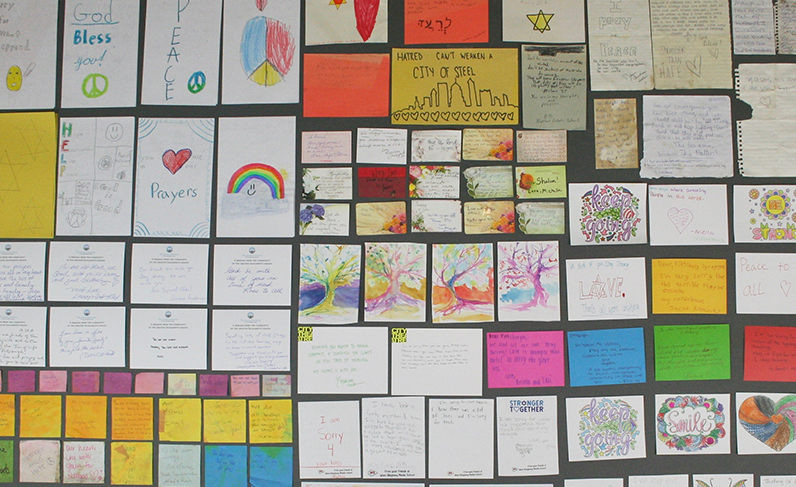 History in the Making Remember that there is only one important time and it is now.

In the agonizing days just after the October 27, 2018 murderous attack at the Tree of Life synagogue in Pittsburgh, Pennsylvania–the deadliest attack on the Jewish community in American history–people gathered within the temple’s Squirrel Hill neighborhood, throughout the city and region, and in states and countries throughout the world to express their anguish and grief. Overwhelmingly, people gathered to reject bigotry and hate; there were emotional vigils, demonstrations, and marches.  It was an unprecedented cultural, political, and historical moment.  It was the kind of monumental experience that future historians would research and write about, using the historical record to put the event into perspective for future generations. In a moment of exceptional forethought, Pittsburgh’s Senator John Heinz History Center helped create this historical record by immediately recognizing that history was in the making in the days, weeks, and months after the incident. So, the Center’s Rauh Jewish History Program & Archives began soliciting and collecting “documentation of that day and its aftermath, from the regional, national, and international response, to its effect on Jewish life in Pittsburgh. These efforts to document a painful moment in our history serve to educate future generations and ensure we never forget.”

However, the Heinz History Center’s effort has been far more robust and significant beyond passive document collecting and news clipping. Their swift action campaign extended to a variety of ways they could best capture, preserve, and share the moment with historians and the public in as close to real-time as they could. Here’s what they did:

Instead of relying on others to do the kind of immediate and necessary historical work necessary at the time, the Heinz History Center mobilized as much human, technical, and material resources as it could to engage the historical moment sufficiently with care and due diligence–lest it slip away.  And the project is ongoing.

We’ve long advocated for this type of historical engagement, focusing on the present in addition to the as well as the past.  After all, what happens today will soon enough be in the past.  We can’t escape this timeline.  As the Heinz History Center shows us, doing contemporary history work (i.e., engaging current events as historical events) is among public historians’ best practices. It demonstrates not only wise forethought and perspicacity, but it also reveals something profound about an organization’s operating philosophy, understanding, and values.

We’ve previously written about this topic (see History is Upon Us and Engage History In Real Time).

In our opinion, too many local history organizations are rear facing and fixated on a static past. We think these organizations can and should actively engage current events as historical events because come tomorrow, sure enough, today will be the past.  At The Social Voice Project, we strongly encourage public historians, local museums, and historical societies to engage history in real time by doing history in real time. Carpe diem!  Here’s what can be done:

Engage and inspire the public through exhibits and displays focused on current events.

At The Social Voice Project, we celebrate history and people through our community oral history projects that give us a chance to look, listen, and record the voices and stories of our time.  We encourage all local historical societies and museums to capture, preserve, and share their communities’ lived experiences, memories, customs, and values. Future generations are depending on it.

Contact TSVP to learn more about our commitment to public history and technical assistance in creating community oral history projects.