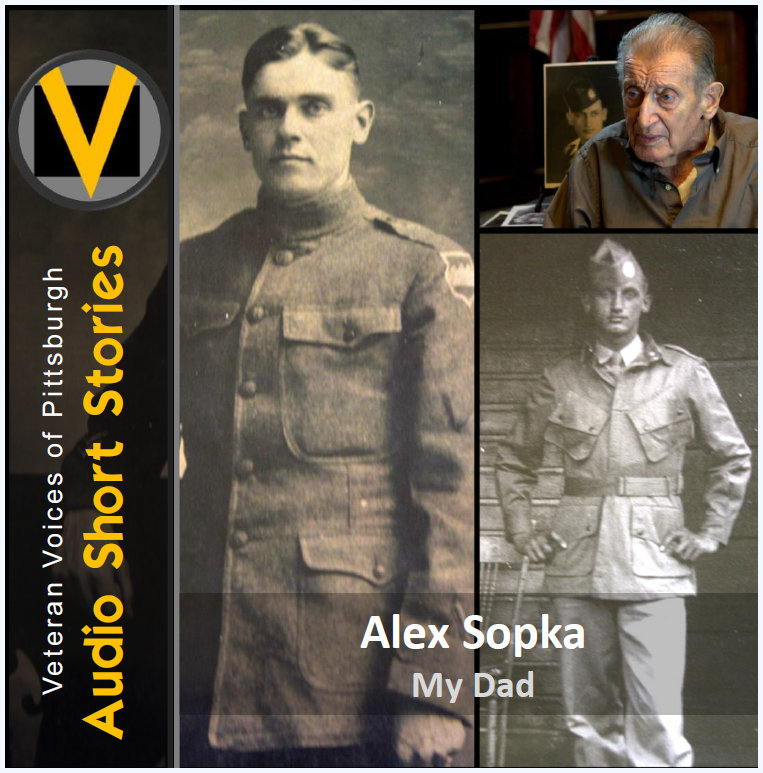 On this episode of Argot: Audio Short Stories from the Veteran Voices of Pittsburgh Oral History Collection, WWII veteran Alex Sopka of Gibsonia, Pennsylvania shares a story about his Russian immigrant father, who was wounded by poison gas during WWI. Alex Sopka grew up on the rough streets of Pittsburgh’s Northside, the son of Russian immigrants.  His father’s path towards American citizenship was to fight in WWI, where gas destroyed his lungs.

Like many young men, the news of Pearl Harbor inspired Al to action but the government drafted him first–for good measure.  After an unhappy stint with an Army artillery unit, Al anxiously volunteered for infamous Airborne duty as fighting against the Germans heated up in late 1944-1945.

The idea of jumping out of planes to fight the enemy seems glamorous, but only in Hollywood movies.  Once on the ground, if a paratrooper survives the fall, he then becomes a regular infantryman dangerously engaging the enemy nearby.  “Don’t shoot ’em until you’re up close,” they were instructed.

Of course, the scared, young lads of Al Sopka’s unit carried out their orders as best they could.  It was tough going; kill or be killed.  Well into his 90s, Al Sopka still dreams about the horror.

The original interview was recorded in October 2012 by The Veteran Voices of Pittsburgh Oral History Initiative. This audio short was engineered and produced by Kevin Farkas. Music: “Gas-Microscopic” by Soham Kpiras, “Sonatas of Ages” by Peter Billie Larson (available on Soundcloud.com).