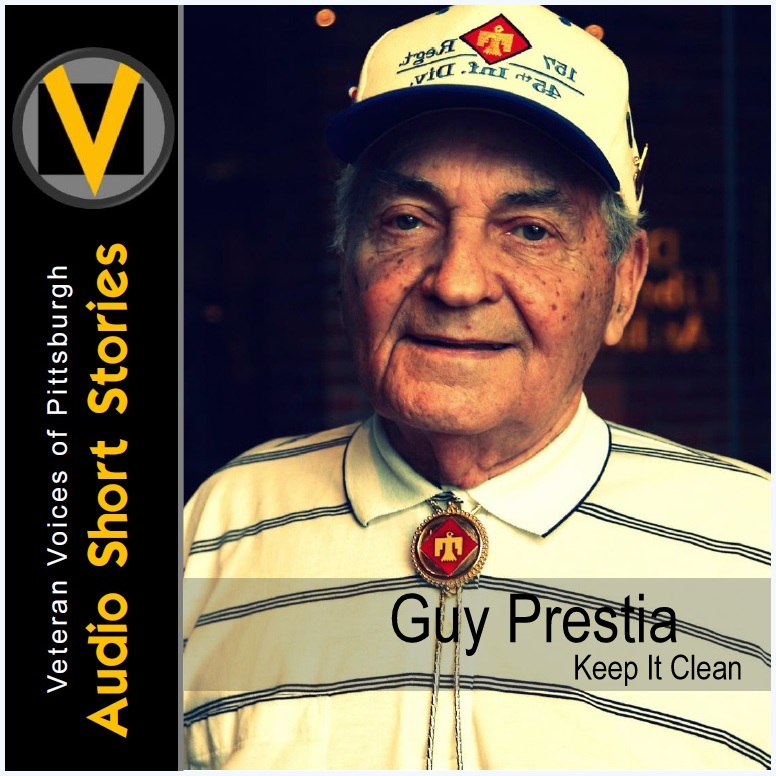 On this episode of Argot: Audio Short Stories from the Veteran Voices of Pittsburgh Oral History Collection, WWII veteran Guy Prestia of Ellwood City, Pennsylvania shares a story about a young man who was unprepared for battle, as originally told in January 19, 2015 to the Veteran Voices of Pittsburgh Oral History Initiative in Beaver Falls, Pennsylvania.  This audio short story is engineered and produced by Kevin Farkas.

During WWII, Guy Prestia of Ellwood City, Pennsylvania was among the first Army troops to reach Europe through North Africa, Sicily, Salerno, and Anzio. From June 1943 through Allied Occupation, Guy served with the 45th Infantry Division, a unit formed out of the Oklahoma Army National Guard from the American Southwest.

Official military records state that the 45th Division endured 511 days of combat and more than 63,000 casualties. By war’s end it was a tough, seasoned outfit. But it wasn’t always that way. “We really didn’t know what we were doing at first,” Guy admits. Mistakes were made. There were tragic friendly fire accidents in the fog of war, literally.  And some casualties were neither from the enemy or friendly fire.  Guy tells the story . . .

The original interview was recorded January 19, 2015 by the Veteran Voices of Pittsburgh Oral History Initiative. This audio short was engineered and produced by Kevin Farkas.