George Tita : It's Not Worth Killing a Guy 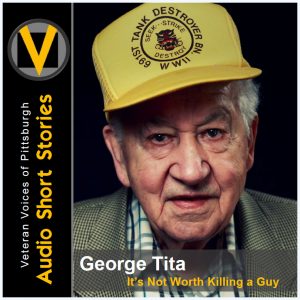 George Tita of Darlington, Pennsylvania was drafted soon after the attack on Pearl Harbor.  Along with his childhood friend, Pete, George served with the 691st Tank Destroyer outfit.  In March 1944, the 691st shipped to Europe.

George had more than a few brushes with death.  There was his first shelling experience while dug into a French hillside with Pete.  Another time a German bullet missed him by mere inches.  And then during the frighteningly cold winter of ’44 near the Swiss border, George nearly died of hypothermia.  Seventy years later, the unforgettable thought of nearly losing his life is still haunting.

But one close call with a young German soldier forced George to think about the value of the enemy’s life.  To kill or not to kill the young man?  That was George’s dilemma.