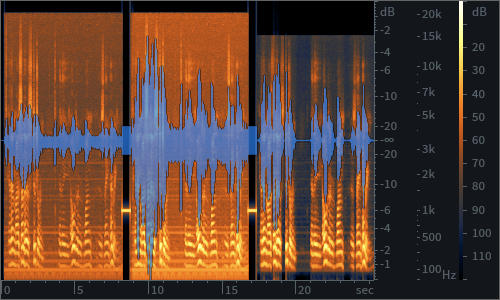 “Wear your headphones to monitor your audio,” we say. Sound engineers give this advice many times to our podcaster clients. “Don’t just watch your loudness meters,” we warn from experience. “Listen to the audio quality.” A client who didn’t wear his headphones to monitor audio quality sent us this. “Well, things looked kinda OK on the mic input meter,” he protested. But what our client didn’t hear—because he was not monitoring the sound with his ears—was this incredibly harsh line static that nearly destroys the recording.

What’s the cause? Could be a lot of things: a grounding issue, EMI, some strange breakdown of electronic components or circuity in the recorder. Whatever the audio problem, the recording session should not have proceeded until the issue was resolved. However, our client recorded this interview anyway and now we are stuck with this audio for all time—literally. You see, the man being recorded here passed away the following year at the age of 97. So, no second chances to do this interview again.

Moreover, this man is Henry Hoffstot. He was an intelligence officer during WWII. In May 1945, Henry’s small team of soldiers was sent to capture the famed German rocket scientist, Wernher von Braun—the inventor if the V2 rocket and eventual father of the American space rocket program. He was responsible for the hefty Saturn 5 that launched astronauts to the moon. In official Army photographs of the capture, Henry’s the slight young officer with the classy moustache standing next to Braun.

So again, this is a valuable lesson why podcasters should always monitor their audio as they record it. The sound quality of that next podcast just might be incredibly important to history.

THE PROBLEM and THE FIX

The audio has a serious line noise problem.  The video here demonstrates our audio “fix it.” The first clip is the original audio. The second clip is normalized up to 0dB to help us really hear what the sound issues are. The third clip is processed and loudness normalized for mono (-19dB).

This audio was processed with iZotope RX7 using a variety of effects, including EQ to roll off the unnecessary high and low ends of the frequency spectrum. I used a brickwall LPF to simply eliminate the useless top end above 16kHz. We used the Mouth De-click effect, but the real heavy hitter effects were De-click (aggressive with the multi-band periodic click algorithm), Spectral De-noise, and Voice De-noise. The De-Esser was very effective in taking down many of the remaining strident high frequency voicings.

Is this perfect? Nope. But as the saying goes—don’t let the perfect be the enemy of the good. So in short, we think this audio is about as good as it’s going to get. Anything more, we’re afraid, will just seriously degrade the natural timbre of Henry Hoffstot’s voice. After all, we owe it to Henry that he should sound like Henry. “Fixing” bad audio is one of our specialties at The Social Voice Project. If you have sound quality issue with your podcast, contact us. We might be able to help.

How Good is Your Ear?

Mix & Master With Your Ears

Theater Recording (Boundary Mic vs. Back of House Mic)